You may be unaware that the idea to bring this blog into existence, to call forth words from the aether, was actually not mine but that of a pair of friends and former coworkers.  And now in the enduring spirit of caving to external pressure on which this blog was built I've decided to attempt another venture suggested by one of these original culprits.  Art.  That's right art.  Much like the initial decision to begin a blog the entire concept of actually attempting the creation of art rather than simply observing someone else's art, and nodding sagely doing my best impression of "getting" the artist's intent, gave rise to a set of emotions and thoughts I imagine are similar to those experienced by a man taking the proverbial "long walk off a short pier".  The emotions run the gamut from panic to anticipation.  While thoughts like: "These shoes don't match my outfit at all." "I bet their names aren't really Vinnie and Joey." "I knew I should have packed my floaties today", and "Did I unplug the toaster?" flash through my mind like scenes from a B mob movie. Having moved past these emotions to acceptance and having confirmed that, yes, the toaster is in fact unplugged I feel fairly confident that art will be forthcoming in the near future.  I haven't yet decided what form said art will take, other than poor, but stay tuned for the moment of decision and ensuing presentation.  If nothing else the experience should be good for a laugh.
Posted by B 0 comments

Today's show is brought to you by: The letter c, Death, Taxes and other Universal Constants

The arrival of my 2010 Federal tax return earlier today began a train of thought only slightly less tangled than the cords of your favorite portable electronic device after they've been left neatly coiled and untouched in a hermetically sealed container placed on an otherwise empty shelf within a large vault.  Which is to say; so completely and hopelessly tangled as to make one truly appreciate Alexander's solution to the Gordian Knot.  The mechanisms involved in this spontaneous tangling of electrical cords remain one of the great mysteries of the universe despite the best efforts of scientists, seers, and the cast of all three CSI franchises.  But we were talking about taxes.  There are a number of constants in the universe, and several constants which are numbers, among which are taxes.  There is much speculation on how taxes came to be a constant but the most widely held theory is that the government, being in need of money to spend and having been denied an increased allowance by its parents and unwilling to go out and get a job like the rest of us, created taxes in order to be able to buy lots of of mostly useless stuff at prices much higher than what they would have paid at Wal-Mart.  It should be noted that some scholars suggest that the government may not have been unwilling to get a job but was unable to find a job due to the fact that it pretty much doesn't do anything useful.  Other scholars believe that the accusation of doing nothing useful is overly negative; citing evidence that the government simply doesn't do anything... useful or otherwise.  Regardless of the their origin taxes got me thinking about other universal constants such as the letter c.  For those who were unaware, and unwilling to click the conveniently provided link, c represents the speed of light in a vacuum.  Which begs a very interesting question. What brand of vacuum are they using.  My vacuum doesn't even get all the dirt out of the carpet; let alone the light out of the room.  So far begging that question hasn't gotten me any answers but I did get $17.23 and two buttons.  Stay tuned for more in the mun(day)nes ahead.
Posted by B 1 comments

Hope Floats. Toast... Not so much.

Well the results are in and sadly it would appear that gravity has won the day. 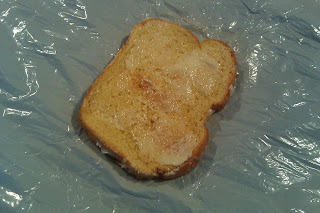 I suppose it makes sense.  Landing butter side up is probably only a cosmic misdemeanor while violating the law of gravity is apparently a felony charge.  Still it is somewhat disappointing not to see the toast float.  I'd like to try the
Toast and Cat experiment next; but a lack of cats and a healthy respect for PETA's nonexistent sense of humor lead me to believe that might be unwise.  Maybe I'll watch that film instead... Or not.  However; the random reference to a film I've never seen did provide me with a new insight.  Hope is less dense than air.  Or perhaps it has some anti-gravitic properties...  Maybe soon we'll all be flying around in aircraft held aloft by hope.  Or maybe we already are.  I always hope the plane stays in the air when I'm flying.  I've got a pot of coffee and a couple new ideas for the blog brewing so stay tuned.  And have a mug ready.
Posted by B 0 comments

Teaching a Sunday school class for 4th-8th graders is always an interesting experience.  Not matter what point you're trying to convey it's near impossible to be sure just what they'll actually take away from the lesson.  The conclusion reached during today's lesson on Psalm 23? Sheep are stupid. An ineloquent conclusion perhaps; but wholly accurate in it's assertion.  Not the point I was trying to make but I choose to believe that this nugget of truth will serve them well in the future.
No work tomorrow.  Should be a good time to complete my toast based aeronautical engineering project.  Look for results and pictures.  Also a new page, or pages, for the blog with some insight into what to expect in the mun(day)nes to come.
Posted by B 0 comments

In addition to being an emissary of galactic peace toast also posses another perhaps more peculiar property.  The unusual attraction between the buttered side and the ground.  It is often stated that when dropped toast will always land butter side down.  So common is this occurrence and so universal in the experience of mankind that the idea is widely held as an irrefutable, if inexplicable, law of the universe; much like the law of gravity.  Which leads me to wonder...  What if all the sides were buttered?  In the absence of the dichotomy which underlies this law what result should one expect?  My hypothesis is that the toast, being unable to determine on which side it should land, will simply float above the ground while the universe contends with this paradox.  And thus in the name of science, and for the sake of the ridiculous, I will conduct a formal experiment to determine the truth of this hypothesis.  Stay tuned for the results; which will no doubt be shocking as is frequently the case when one does science.
Posted by B 1 comments

That.
Posted by B 0 comments

What follows are the likely overly verbose ramblings of an individual who's life prior to this point was only passingly mundane and therefore failed to warrant any form of chronicle or record within which to preserve for posterity the events experienced by the author up to the point at which we now find ourselves. Aside from simply being a forum for the author to plow headlong into whatever topic strikes his fancy and simultaneously exercise a vocabulary which is only marginally better than average (and I assure you this is just such a forum) the author sincerely hopes to be able to at times entertain, inform, challenge and and perhaps on the rare occasion when the mundane allows even shock the reader. In keeping with the latter of these goals and in an admittedly desperate attempt to keep you reading I believe it my most solemn duty to bring to your attention a most disturbing fact. Soylent Green... is people. Once one has recovered from their initial disgust concerning the origin of this popular food one is forced to admit that it certainly explains the logic behind Soylent's recent “You are what you eat” ad campaign. And if you are one of those readers so jaded as to be unmoved by the horror of this revelation then I could, if you were interested, recommend several fine museums housing exquisite collections who would no doubt delight in the opportunity to ensconce you among their exhibits.
Posted by B 0 comments
Newer Posts Home
Subscribe to: Posts (Atom)