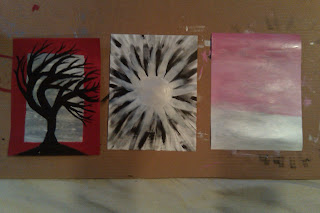 This is a shot of all three pieces on which I've been working.  The one on the left is, at this point, a finished product though I may decide to add to it later; while the other two are at best half finished.  But it gives you some idea of what I've been doing; which in all honesty is quite a bit more idea than I have when it comes to what I'm doing.  Maybe you can fill me in.
Posted by B