Got a cool vintage mirror at Goodwill this morning. Needs some touching up but it'll be nice once repainted. Already bought paint and sandpaper so we should have before and after pictures by Monday. In the mean time there's this: 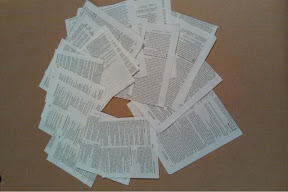 Last night's project was getting these cut to the proper shape for origami. Tonight's project, and the project for the next several nights I suspect, will be to get them all folded. Then comes the task of mounting the origami for display. Still working on exactly how that's going to work but I've got a couple ideas so we'll see what ends up working out best.
In other, and completely unrelated, news the new season of Castle starts Monday September 19th. Which is basically the best thing which will happen on tv this year so I'm pretty stoked. Actually to be honest it's absolutely the best thing which will happen on tv this year and I'm totally stoked. It also bears noting that if the blog isn't written before the start of the show it will most likely be late. The blog not the show. The show will be on time the blog perhaps not.
In other slightly less unrelated news. That is news related by word association if not topic. I've always wanted a castle. But since castles tend to lack the amenities of which I am so fond I'm thinking this more modern fortification may be a better choice: 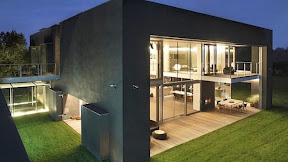 Now I just have to come up with whatever absurd sum they're asking for this thing.