As promised today we, and by we I mean I, will unveil the first in what will be at least a two part synopsis of our investigation into all things flat and otherwise. Originally my intent was to provide a single synopsis of the results and offer my conclusions on whether the tested items were best in their natural state or flattened/unflattened. But there are so many objects to test and several of the items I wanted to unflatten were not readily available and a busy work week coupled with a trip out of town has prevented me from heading out to locate said items. So today we offer a selection of flattened items with the rest of the results soon to come.

First up a hat. And not just any hat. A hat most would consider a fedora but which is in actuality a trilby. 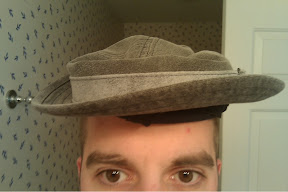 Now I'm not one to underestimate what kind of stupid things people will wear in the name of fashion, for instance all of Lady Gaga's outfits, but I can honestly say that I don't think this look really has any traction. At very least I won't be pioneering the look. As far as I'm concerned this hat simply loses something when flat.

Next up a can of soda. While soda cans, or cans of pop depending on which part of the country you hail from, are often flattened after being emptied, to save room in the trash or prove that your forehead is good for more than just protecting the frontal lobe, for the purpose of our experiment it was important not to have an empty can. The results were predictably messy. 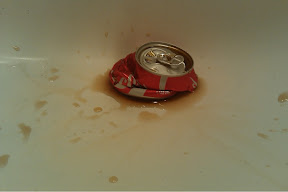 The most serious complaint I have with the flattened can is a grievous lack of volume. While the slimmer profile might make for easier storage I can't imagine any reason to have such a diminutive source of caffeine.

And finally, for today at least an orange. Once again I think God knew exactly what he was doing when he shaped the orange. The flattened orange... 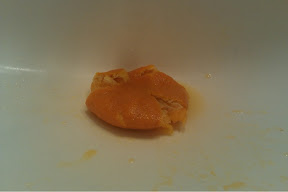 Was significantly easier to peel as a result of the ruptured peel. There was nothing wrong with the taste and the consistency was still pretty close to original. But eating the pulpy mess was somehow less satisfying than downing the delightful slices I'm to which I'm accustomed.

Based on the first batch of tests it would appear that flattening an object which is naturally otherwise is not always and maybe never for the best. But there is still more experiment to come and perhaps more to be flattened. So stay tuned as we go to war with the status quo to determine the truth. And the truth will set you free. Unless the truth is that you did run over that hobo with your suv. Then the truth will probably get you 25 to life.