Luke; Come To The Dork Side

You may have realized by now that I am something of a nerd, and yes I can use the n-word because I am one, and if you haven't realized this by now you must be new here.

I know at first glance I might not fit your preconceived notions concerning how a nerd should appear and behave. After all I have impeccable personal hygiene, function normally in polite society, dress well, I don't speak elvish or Klingon and do understand the basic workings of most major sports.

That said I would probably recognize elvish and Klingon if I heard them, I could speak ad nauseum on Fox canceling the best sci-fi show ever made and how George Lucas is ruining Star Wars. I know what a T.A.R.D.I.S. is and what the acronym means, and I have a conviction, not an opinion, on the matter of whether Kirk or Picard is the better captain.

Given all this it should come as no surprise that my childhood was rife with nerd related activity. Chief among these activities was the collectible card game (CCG). And the king among these CCGs was Star Wars. I played every chance I got; and one year even convinced my folks, who were wonderfully accommodating, to take me to the world championship tournament. I made it to the semi final round in that tournament and ranked among the top hundred players in the world; which as a kid seemed like the pinnacle of human achievement.

So when I saw an unopened box of cards from a game, now over a decade out of print, that was as much a major player in my childhood as I was of the game; I couldn't pass up the chance to relive some of those childhood memories.

And I have to tell you it was worth every penny. I felt like a kid again opening each pack of cards and pouring over the contents; contemplating how I could use the various cards to construct a game winning deck. That alone would have been enough to justify the expense but the cards just kept giving as one of the packs I opened contained a particularly rare and powerful Lord Vader card. 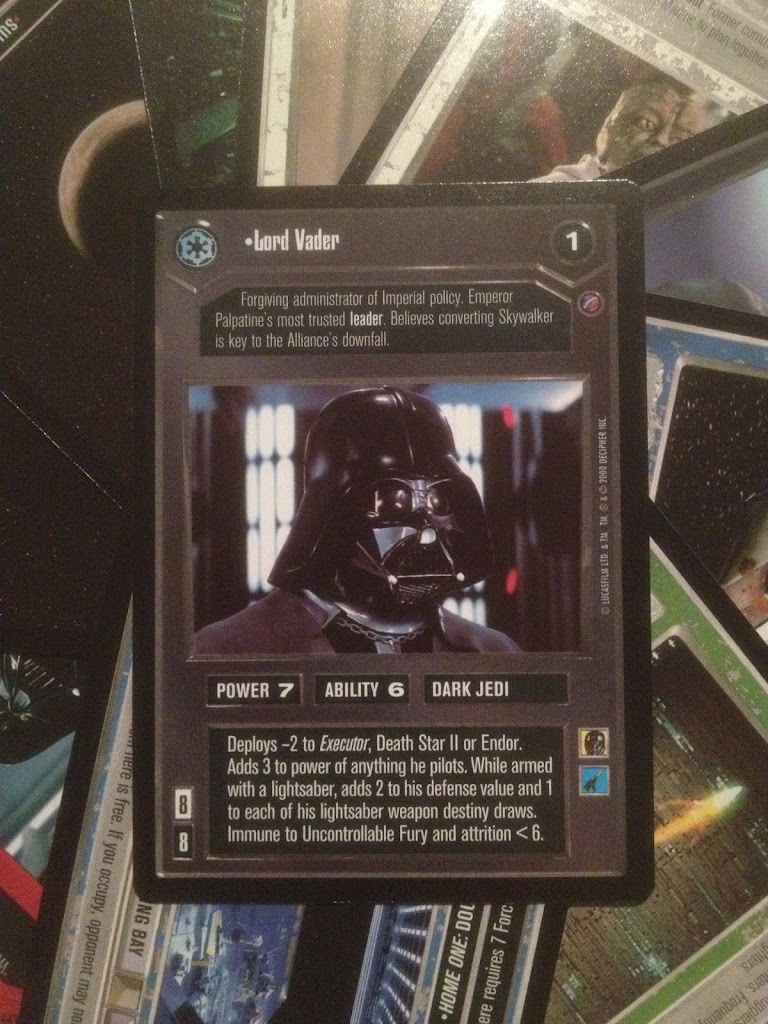 This was a card I'd always wanted but never been able to get my hands on as a kid and to finally have one, even after all these years, felt like winning the lottery.

So take a piece of friendly advice from the resident nerd. The next time you pass something out of your childhood on a shelf or come across it in a box of your old stuff; go ahead and pick it up. Forget that you're "too old" to play with toys anymore. Be it a Barbie or maybe some old Legos take a minute to play with it like you would have when you were a kid. Relive those memories and, if only for a moment, let all the "grown up" worries, cares, and concerns slip away. I think you'll be pleasantly surprised at just how much joy those childhood things can still bring you.
Posted by B