The little army dudes that took the library by storm earlier this week have now taken their fight to the produce department.  This fall out may be over the fact that I'm not overly keen on paying CrAzY prices for "organic" veggies.....at least not at the grocery store.  .....although I am stoked that this weekend marks the first farmers market of the season.  ......and whilst I choose not to buy organic, I am particularly keen on buying locally grown produce.....not to mention that when purchased from local farmers is typically a praction of grocery store prices.  This keeps as much green stuff in my wallet as it puts in my belly.  ....and that my friends, is WINNING!!!!! 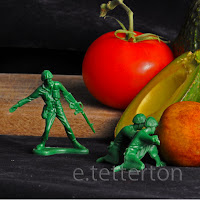 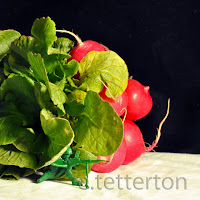 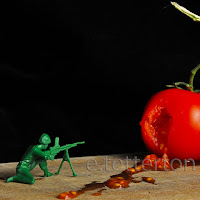 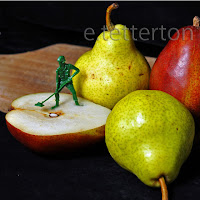 May The Odds Be Ever In Your Favor

Today I experienced something rather unusual. I spent the day with my sister, a rare occurrence to be sure but not something I consider unusual, in Raleigh hanging out and doing some shopping; also not unusual. What was unusual is that despite hitting what seemed like every clearance rack and discount store in the greater Raleigh-Durham area I walked away at the end of the day having purchased nothing but a significant quantity of food.

And while this is a particularly unusual occurrence it does seem apropos given that the later portion of our day was spent viewing the The Hunger Games... In IMAX which as a guy I found highly enjoyable due to the human male's innate love of huge viewing screens and absurdly overpowered sound systems. The larger and louder the presentation the better the male viewing experience and IMAX delivers in spades. That the movie is both enjoyable in its own right and a features a screenplay adaptation faithful to the source material doesn't hurt either.
Posted by B 0 comments

No Librarians Were Harmed in This (photo) Shooting

I take this break from my "Chuckle-A-Thon" to bring you plastic army dudes taking over the library. 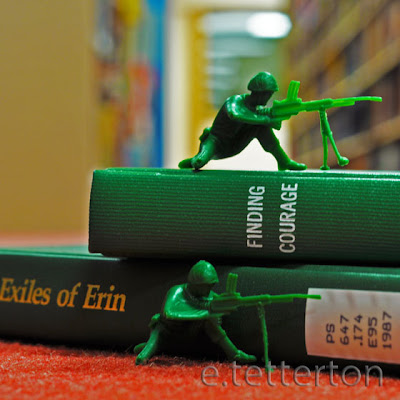 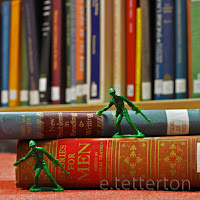 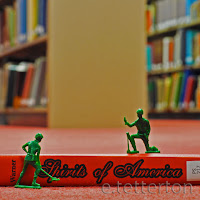 Cooking is not an activity that most seem to find particularly relaxing. Even many professional chefs seem to exist in a state of perpetual anxiety and stress when in the kitchen; I'm looking at you Chef Ramsey. But thanks to one designer's morbid sense of humor there is finally a fun and functional way to relieve some that pent up stress. I give you the ex.

While it may not keep your pots from boiling over it may just keep you at a low simmer. Or if like me you aren't prone to reduction induced rage; it may simply give you an reason to smile when you put your tools away after preparing your favorite dish.

Posted by B 0 comments 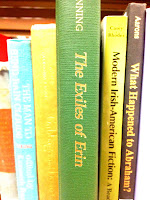 …..on blogging that is.  I’ve actually been quite busy, even busy with mostly mundane things.  This has provided plenty of blog fodder, although sadly an atypically small amount of time to report on them.
Tonight I find myself tucked deep into the library….not in search of a book (of course)…..but rather in search of an internet connection (my primary use for the library).  In general I pride myself on my frugality…..but choosing not to have internet at home has indeed been a new foray into this past-time.  I have however become incredibly intrigued by book titles and am planning a photo safari (probably along with my army men & a barrel of monk(e)s) soon.
Stay tuned for further developments.
Posted by Erin 0 comments

My life is, under normal circumstances, quite mundane; one might even say extraordinarily so. Today however has been anything but.

Instead we've had a rather mixed bag of news and occurrences. Some good some bad and some that defy such simple forms of classification.

I'm not certain how I feel about this turn of events. On the one hand this makes for an interesting if somewhat unhappy diversion from the mundane routine of a normal day. On the other hand I don't prefer unhappy even as a diversion and the mundane is sort of what I do.

The day brought with it the possibility of future joys and happy endings. It also brought a certainty of future grief and bittersweet farewells.

So now comes the waiting and praying which inevitably follow these kind days.

And lacking a better way to pass the time; I've queued up an appropriately moody mix of feel good, encouraging, and melancholy tunes and set the playlist to loop.

I suppose the only thing to do now is wait until tomorrow and see what the sunrise brings.
Posted by B 0 comments

As I pondered what content should grace these pages, metaphorically speaking, I arrived at something of an impasse. I have several projects and ideas which are blog worthy; but none sufficiently complete for me to want to display them at this juncture. And I didn't have a single really bloggable random thought to pursue. This situation is due in no small part to the fact that I have done effectively nothing today.

Last week was a nightmare of double shifts; as well meaning managers at both jobs loaded me with hours to replace those lost to my recent trip to Colorado. The resulting work schedule had me working over 85 hours in a five day period; which after accounting for travel and prep time left me with approximately 3.5 hours of sleep a day; most of it in less than 1 hour increments. So this being my first full day off since that excitement I decided to simply relax and do as close to nothing as I could manage.

Which has been great for me but not so great for my inspiration. Inactivity is a lousy muse. However my lack of accomplishment lead me to wonder what other people have accomplished on the 7th of March. And the answer is quite impressive. What follows are some of March 7ths' most memorable moments throughout history and my thoughts on those events.

1530 - King Henry VIII's divorce request is denied by the Pope Henry then declares that he, not the Pope, is supreme head of England's church.
So much for the separation of Church and State. And in all seriousness why did women keep marrying that guy?

1774 - British close port of Boston to all commerce.
Party poopers.

1876 - Alexander Graham Bell patents telephone.
That was a good call.

1908 - Cincinnati Mayor Mark Breith stood before city council & announces that, "women are not physically fit to operate automobiles"
This must be the oldest running joke about women.

1912 - Roald Amundsen announces discovery of the South Pole.
Santa isn't there so nobody cares.

1933 - Game of "Monopoly" invented.
An accurate indicator of how much time it takes to play.

1962 - Beatles made their broadcasting debut on BBC radio.
The British empire's final invasion.

1968 - The BBC broadcasts the news for the first time in color on television.
The news never has done well with issues that are black and white.

1987 - Gavaskar becomes 1st cricket batsman to score 10,000 Test runs.
I have no idea what this means but it sounds impressive.

1994 - 8th American Comedy Award: Carrot Top wins.
And that was the best joke of the year.

1996 - 1st surface photos of Pluto (photographed by Hubble Space Telescope)
Hey; I know that guy. He was a planet once... Right?