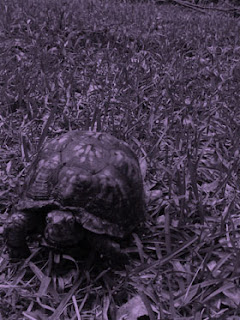 An Ode To A Thistle Hued Terrapin And Other Absurdities

Have you ever had a thought so completely random and outside the bounds of your normal thought patterns that any attempt to discern its origin is as fruitless as an orange grove in the Antarctic. And has such a thought ever gotten lodged in your subconscious and then floated into the realm of conscious thought at seemingly random intervals with such encounters sometimes separated by spans of a week or more. As you may have guessed I have been in possession of such a thought for some time now and have yet to uncover an effective method for dislodging my unwelcome if somewhat humorous guest. What now lies before you is an attempt to exorcise the specter of this thought by giving it a body of its own; even if only a body of the written word.
The thought in question is "purple turtle". Perhaps this terrible terrapin is the result of watching reruns of The Ninja Turtles as a child. Donatello was always my favorite. Maybe it's the rhyme that makes it stay and play and never ever go away. I'm suspicious that the purple turtle hails from the same realm as my friend's Cosmic Possum but that suspicion is not something I've been able to confirm at this juncture. Where the turtle hails from originally is in my mind of less import than where he has chosen to reside now. Namely in my mind. Perhaps now that others are aware of his existence he'll chose some other poor soul with which to room. In the mean time I'm going to try to lock him up for the night and hope he stays put long enough for me to get a reprieve.

Posted by B 0 comments 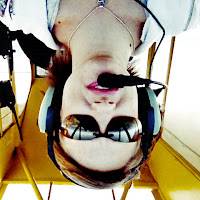 “Rewriting history will not change the past, but a small change in perspective can.” – e. Tetterton


Today I’m delving into the deep waters of deep thoughts on this delightfully dreary, drippy day.  …..and pondering Proverbs 20:5…… “The purposes of a (wo)man’s heart are deep waters, but a (wo)man of understanding draws them out.”  So often when thinking through my past, I focus on the “What”?  “Where”? & “When”?…..but not “Why”?  ……yet it is through the answer to this incredibly simple question that I can begin applying the lessons of the past to my future.
Posted by Erin 0 comments

The Aforementioned Buoyancy Of Hope

We've spoken previously of hope's oft purported tendancy to remain aloft when there is no logical reason why it ought to do so. And while the this peculiar property defies our understanding it is well that it exists. For some days grabbing a hold of and relying on this buoyancy is all that keeps us afloat in a sea of uncertainty. Which doesn't mean that bobbing along in this fashion will be a pleasure cruise. After all; Hope deferred makes the heart sick, but a dream fulfilled is a tree of life. (Proverbs 13:12 NLT). Waiting on that hope to be fulfilled can be a seriously miserable experience. But we hold onto hope because despite the pain there is a tree of life at the end of the journey. Sometimes we can't see that for the waves and sometimes the tree isn't growing where we thought it would be but never the less there it is. And when we finally reach that point we'll know that "every second lived is worth each second of the pain". So grab a hold of hope and hang on tight. Cause drowning is a terrible end.